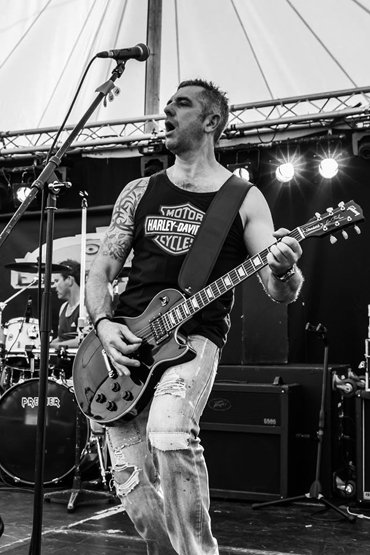 “I joined 5th Element in 2013 when founding member Dave Spink decided to retire from the band. I’d met Neil as part of my day job and had been to see 5th a couple of times. I was really impressed that they were all about putting on a professional show and communicating with the audience. Whether that was in the corner of a pub, or at a 2000+ biker rally, they were really tuned-in to the fact that it was all about the audience having a great time! So when I got the call from Neil and Ann it was a no-brainer. I went from a musical hiatus to 50+ gigs a year. Fortunately I have a very understanding other half and, because my son also plays, she was (and still is) cool about what we do.

“Musically my teenage influences were pretty much prog and classic rock. I went through the punk era at school but none of that really stuck so I still like the classics and I try and be as open-minded as possible, be that new material or music from many other genres. After a weekend gigging, I might be listening to something a bit more traditional and mellow…not very rock’n’roll, is it?

“When I joined 5th I wanted to try and find the way to develop the 2nd guitar parts without it getting in the way of what the lead player was doing. Over the last few years I think that’s starting to happen which suits me fine. Sometimes less is certainly more. Recently I’ll take the odd solo which is nice, but in the main I reckon it’s best to leave all that tricky stuff to the main man!

“Gear wise, 99% of the time I’ll use my Les Paul through a very 80’s Marshall rack… I know what you’re thinking ‘All the gear, no idea!’ I still really like the tone and the set up and I’m too set in my ways to start changing my rig. If you see me tap dancing on pedal boards at a gig, that’s often because I’m switching the lighting effects as well, it keeps me occupied!

“When I’m not doing the band stuff, I’ll be trying to keep fit, walking our two crazy dogs and then if I want to feel really old, I’ll go and watch my youngest’s band!

“Playing in 5th is a massive part of my life and I consider myself to be in a very privileged place. If you ever fancy a chat after a gig, it’d be great to meet you.”

Tonight, we should have been at the Pub in Lancaster with this lovely lot. Sadly, we're not. But we're thinking of you all and hoping you're all staying safe and well. Look after each other, and keep yer chin up. It's going to be one helluva party when we meet again! Big love to you all 🤟 ... See MoreSee Less