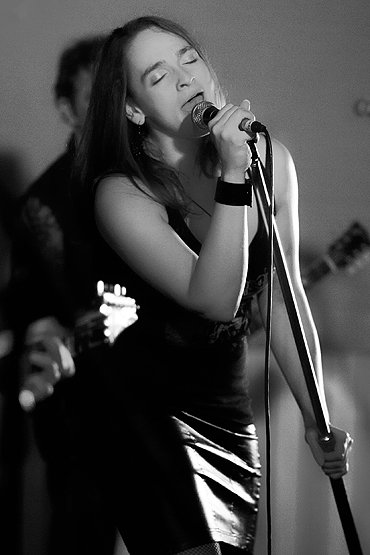 “I was born in London but grew up in Scotland. I am therefore – of course – a Jockney.

“I’ve been warbling at anyone who would listen since I was 4. I got my love of singing from my grandad, on my Dad’s side. We used to stay at my grandparents’ house every summer. Grandad started off as a choirboy, and the older he got the bigger and richer his voice became. I can still hear it rolling out from the bathroom as he sung ‘Molly Malone’ while he shaved in the mornings.

“My biggest musical influence though is definitely my Dad. He’s got really broad taste in music, which was great for me growing up. He’d drive my sister and I into school every morning and we’d have anything from the Beatles, the Who, Joni Mitchell, Sex Pistols, Eurhythmics, right through to classical composers like Grieg, Tchaikovsky, Haydn and Mahler playing in the tape deck. He taught me early on that music is totally subjective and half the fun is variety. Dad was also in bands himself as a youth (he plays a pretty mean bass and rhythm/lead guitar) so we did some jammin’ when I was growing up. We still get the guitars out every now and then when I visit.

“Growing up in the Highlands, we villagers were massively outnumbered by sheep. You may be surprised to hear that there weren’t many band opportunities around! I was in one in high school, but because there were already 9 singers in it (true story) I ended up playing bass (not very well, but I got by). Then I went to university in York and basically did as much busking and as many open mic nights as I could. I did actually join a band at uni. We were called ‘The Biscuit Barrels’. We rehearsed endlessly and never played a single gig. But we always had good snacks.

“5th Element is my first proper band. I joined when I moved to Manchester way back in 2007, at the tender age of 23. I absolutely love it. The boys are incredibly talented and good fun, and as a unit I think we’ve got a great sound, a fun show and a solid work ethic. We know we only get out of each gig what we put into it – and that the people who come to see us are what make the show.

“When I’m not out gigging with 5th, I love watching live bands, reading (sci-fi mainly), snowboarding, and keeping fit (to off-set my love of chocolate!). I also manage the band’s website and social media channels, work on our promotional stuff (posters, recordings, videos, etc) and even book the occasional gig. I don’t like being bored!

“Life is not a spectator sport. To me, the real fun of being in a band comes from getting stuck in and going for it – and that’s just what 5th Element is all about!”

It's officially been an entire year since our last gig. But what a frikkin' fantastic gig it was, at the most excel… https://t.co/W46dsGK5Je
☹ https://t.co/YjY7Jlj4R1

It's officially been an entire year since our last gig. But what a frikkin' fantastic gig it was, at the most excellent Pub in Lancaster! 😍😍😍 We simply couldn't have asked for a better audience. Bloody love all of you and cannot WAIT to rock you again 🤘 In the meantime, we really hope you're all staying safe, sensible and well, and that you're all being kind to each other. This road has not been easy. We are all fighting our own battles, some visible, some not. Kindness is the biggest gift we can give each other right now. Neil, Ann, Alan, Aaron and Pete xx ... See MoreSee Less