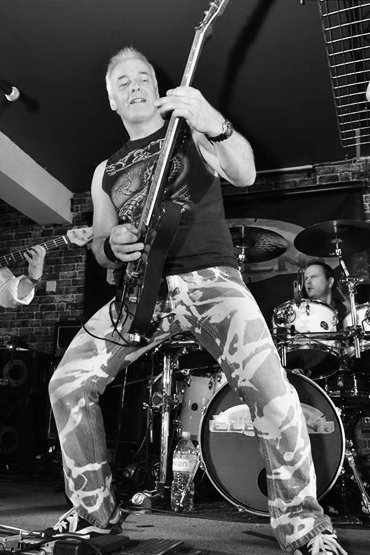 “It all started when my Mum and Dad made me go for piano lessons…and I wanted to play the guitar! (Though some may say I should have stayed with piano!). After a few painful years of not getting to grips with the ivories, I got myself a paper round, saved up and bought my first guitar. Next I needed an amplifier. Busking wasn’t an option – the hat would have been empty. A Laney amplifier came along, courtesy of the nagged parents… And then came Iron Maiden’s ‘Live after Death’ album (vinyl!) and endless hours of trying to work out what they were playing and how I could play it too. This was amongst others, including UFO/Michael Schenker, Y & T, AC/DC, Gary Moore…

“My first gig was in a church hall with some mates in a band called Midden (check out the dictionary meaning!). My first ‘proper’ band was 5th Element – I’m the only original member now, a true relic! I worked with Simon, the son of the band’s founding father, Dave ‘Rocker’ Spink, and he asked me if I’d like to come along to audition. That was around October 1997 (how long ago?!). Our first gig was at the Thatched House pub in Stockport in August 1998. After that we gigged a lot around the Stockport area. As band members changed, our geographical spread grew and more contacts came into the diary. As our horizons expanded, we started playing bike rallies and biker rock nights. We’ve continued to be part of this fantastic scene and have had great support from both organisers and rally goers.

“5th Element’s also given me the opportunity to be part of creating our own original tracks. The recording process can be a challenging one, but the final product is something to be proud of. It’s great to be part of it with the other band members. We now have 9 original tracks, which is great!

“Outside of the band there’s the day job, the funding machine that allows me to be in 5th Element! I also enjoy motor biking, scuba diving (warm water only!), mountain biking, design projects at home with my son and keeping fit – got to keep those creaky knees moving!

“5th Element to me is about great songs played with energy and fun, hooking the audience and taking them along with us for the whole gig …and to the next one. I’ve been in 5th Element for a (cough, cough) few years. It’s something I don’t take for granted. I’ve met so many people that are now friends. The support we’ve had over the years has been, and continues to be, amazing.

It's officially been an entire year since our last gig. But what a frikkin' fantastic gig it was, at the most excel… https://t.co/W46dsGK5Je
☹ https://t.co/YjY7Jlj4R1

It's officially been an entire year since our last gig. But what a frikkin' fantastic gig it was, at the most excellent Pub in Lancaster! 😍😍😍 We simply couldn't have asked for a better audience. Bloody love all of you and cannot WAIT to rock you again 🤘 In the meantime, we really hope you're all staying safe, sensible and well, and that you're all being kind to each other. This road has not been easy. We are all fighting our own battles, some visible, some not. Kindness is the biggest gift we can give each other right now. Neil, Ann, Alan, Aaron and Pete xx ... See MoreSee Less