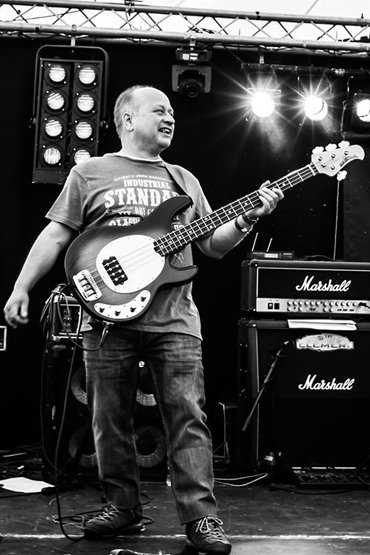 “I was born at an early age to human parents who soon realised that I was nothing special. They decided that they would mould me into a concert penist and duly sent me off to have piano lessons. Having obtained a black belt, and being fluent in major and minor scales, I decided that I would like to try another instrument more suitable to my tastes.

“After much deliberation, I happened upon a double bass in the school orchestra which I took to immediately, the only down side being that the thing was huge.

“Summoning up all my courage, I asked my folks whether they would purchase a bass guitar for me. I expected the worst but they agreed, not realising the terror I could wreak. Being diminutive in stature I could now compete with the rest of the planet’s population, not vertically but sonically.

“After several years locked up in my bedroom teaching myself to play, I abandoned my education and decided I would be either a rock star or be in adult films. Music prevailed, and I set off on a career playing the bass and making as much cacophony as possible.

“Due to my virtuosity, my talents were in much demand and I prostituted myself with local bands, until forming the band Stash based in Bolton. The band toured extensively around the Bolton area and were together for over 10 years until I had to have an operation (puberty) which would put me out of action for some time. Having returned to the scene, I played with the original line up of Riff Raff, plus other local bands but became disillusioned with playing the same material in the same venues.

“Circumstances dictated that I would be off the road for a few years, but one fine morning I awoke with a massive urge to start playing live again. It was on this day that I searched the musicians wanted ads and came across 5th Element requiring a bass player. Answered the ad, auditioned, and now for your sins you have me.

“What a brilliant bunch of people to get to know, and work with. Look forward to every gig, learning new material, and generally having a great time with. Not only that but meeting great new people wherever we go.”

@ricpotter65 Thank you, Rick 😊 Hope you're well? Ann x
Back in February, before this horrendous COVID-19 business, we played a storming gig at Rally with a Chalet. This… https://t.co/OKI8Siqnue

Back in February, before all this horrendous COVID-19 business, we played a storming gig at Rally with a Chalet in Southport. It was a real belter, and we filmed it. Then we got to thinking about ALL the amazing gigs we've played, all the fantastic people we've met along the way, and the ridiculous amounts of fun we've all had together. We really are very lucky! And that's where this video comes from. It's a tribute to all of you (ex band members too!) and we hope it goes at least a little way towards explaining just how much your support means to us. We love you guys and gals, and we are really looking forward to rocking together again. Here's the video. It's directed by the superb Sam Fenton and features our original track 'How Good You Are', from our EP 'Breaking Ground', recorded by the very talented Neil Treppas. It also stars quite a few of you lovely lot! We hope you like it. Loads of love, Ann, Neil, Alan, Pete and Aaron xx youtu.be/uiLFUatEBSM ... See MoreSee Less